As the autumn wears on, so does small game season. While some of us are pushing fields in search of ringnecks and others are biding long hours in cold treestands hoping for a buck to pass underneath, the more intrepid among us are making a racket in the leaf litter trying to drum up some bushytails for the pot.

Now, aside from the itinerant bowhunter, the vast majority of squirrel hunters carry a shotgun or a rimfire. There is, and has been, fierce debate between the two since time immemorial.

But allow us to break the combo: an air gun, like a Gamo Whisper, is better than either.

Let’s back this controversial claim up with some fact-based observations.

This is not the strongest argument, so we’re going to lead with it. For recoil-sensitive shooters, the air gun is the way to go, hands down.

Most air guns (especially in calibers you’ll be using to hunt squirrels) will produce minimal to no recoil at all.

This alone is a blessing to smaller framed shotgunners who may become weary at the end of a firing-heavy day of squirrel hunting.

Say what you will, there is nothing quite like the feeling of a clean dispatch with a rimfire rifle on a squirrel. It takes precision the likes of which are rare in hunting. Shotgunners point, rifle shooters aim, and the vital area on a squirrel is about the size of a quarter. Connecting, and harvesting, brings quite a sense of accomplishment.

It is every bit as gratifying with an air gun, if not more so, because air gun ammo is volumes cheaper than rimfire ammo. Forget shotshell ammo that, in the current market, can cost $.50 to $1 a pop - even rimfire ammo now regularly goes for $.10 each.

Now let’s talk about the fact that air guns, though accurate, are difficult to shoot with the same proficiency as rimfire rifles. Moreover, their knockdown power is lower, so the closer, the better.

The point here is that if you want to make a kill with an air gun, you’ll either want to be very quiet, get very close, or both. It probably wouldn’t be an exaggeration to say that most air gun harvests on squirrels occur between 10 and 20 yards, with few beyond 30. They probably happen, but they’re not likely the norm.

These are the same skills you will need to master if you want to exhibit proficiency with a bow or get more serious about still hunting.

A .22 LR bullet can carry dangerous velocity and energy for almost a mile, making it somewhat questionable to hunt with them in heavily populated areas.

Moreover, the shots you’re likely to take on squirrels are elevated. Of course, there are plenty of ground shots, but a good number of shots taken at squirrels are fired aloft. This can be risky with a rifle.

Even pointed .22 air rifle pellets probably won’t travel much farther than 500 yards, and even at that, with the barrel pointed at about a 45° angle.

Now, you still need to be conscientious of your target and beyond when hunting with an airgun, especially when shooting with an elevated barrel - but nonetheless, they are safer than rimfires. 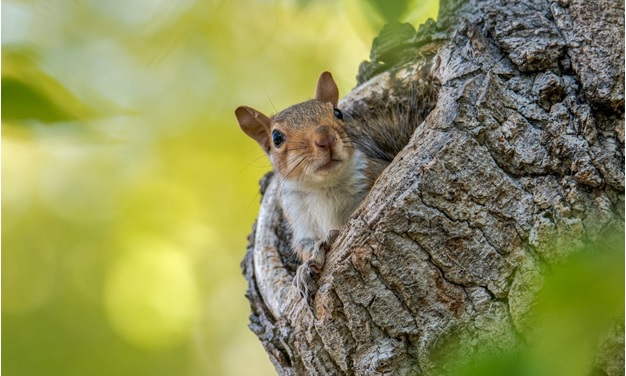 The roar of a 12 or 20-gauge is going to scare even belligerent squirrels and will send all but the most battle-hardened bushytails scurrying for cover.

Even a rimfire, with its much tamer “crack” will spook most squirrels, especially late in the season when small game have their heads on a swivel.

You know what doesn’t really spook squirrels? An air gun. They sound more like a pop than a crack and in some cases, even crossbows are louder.

So you can be much more discrete in the woods when pursuing them, and even after you shoot, other squirrels in the area might not flee, giving you follow-up opportunities.

Finally, as technology increases and we enter the age of inline muzzleloaders, air bows, and advanced compound crossbows capable of reaching nearly 500 FPS, some hunters just want to get back to basics.

And while air gun technology might not be basic, needing to get closer, and shooting at a small vital area with a single pellet, certainly is.

If you’re going to chase squirrels this season with an air gun and you need a new one, consider a Gamo Whisper that has IGT technology. This proprietary feature of select Gamo air guns like Gamo Whisper air guns helps mitigate recoil associated with spring pistons and delivers smoother cocking and consistent, reliable power.

Take a look through our collection via the links above and if you have any questions, get in touch with us at 406-750-7020.